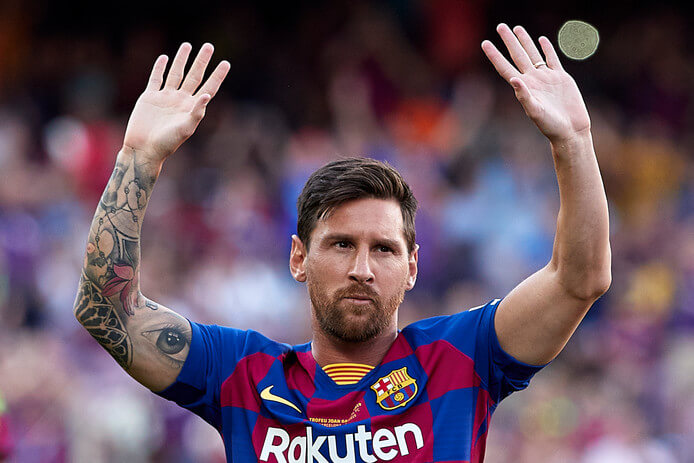 The Argentinian footballer Lionel Messi became popular worldwide as the greatest football player in the league. With several goal-scoring records in his portfolio, he has quite impressive skills when it comes to dribbling the ball past his opponents.

What is Lionel Messi’s net worth?

Since early 2019, Lionel Messi’s net worth is $400 million, which positions him amongst one of the richest football players worldwide.

Forbes ranked Messi as second on their top 100 highest earning celebrities of 2018, putting him at $4 million ahead of Ronaldo and $12 million ahead of Neymar. Yet his new salary for 2019 will continue to offer him a place on the top of the richest active sportsmen on the globe. And we can say for sure this ranking will last for several years from now.

The overall income of Messi comes from his football contracts, but several sponsorship deals support his income. Similar to Ronaldo, Messi has quite a few deals, the most notable being the one with his boots. The significant rivalry between Ronaldo and Messi can be observed in their brand choice: one promotes Nike, while the other fancies Adidas.

It is rumored that Messi signed a long-term deal with Adidas, but the details of the deal were not publicly disclosed. Several reports from Spain advocate that this sponsorship will last at least up until he ends his football career.

Besides the deal with Adidas, Messi is constantly part of advertising campaigns for brands such as Pepsi, Gillette or Turkish Airlines. For 2018, Forbes estimated Messi endorsement to be around $27 million for the entire year.

An important thing to note is that Messi does not quite fancy the lavish lifestyle. He didn’t even accept ad deals for underwear, shoes or fragrances as Ronaldo does. Instead, he has invested his money in several properties such as the Azahares del Parana project near his birthplace.

So, his business choices are kept somehow in the dark. Messi promotes and shares with the world his charity work. He has his organization; Leo Messi Foundation and he was even appointed UNICEF Ambassador back in 2010.

Luis Lionel Andres Messi is an Argentinian football player. He is part of the FC Barcelona Club and Argentina’s national team. He has positioned himself as one of the top-ranking players in the field with several goal records and even received a couple of worldwide recognition awards for his talents.

At the age of 13, he was scouted by FC Barcelona’s youth academy, La Maisa. He was offered an interesting deal, as the club volunteered to pay for his medical bills if he accepted their proposal. His entire family moved to Spain, which was the start of Messi’s impressive career.

Despite his short stature, Messi’s impressive attacking style remembered everyone about the all-time famous, Diego Maradona. And he remained quite dedicated to Barcelona, this being the only team he played with since he first signed.

When it comes to his personal life, Messi married his long-time significant other, Antonella Rocuzzo. They have together two sons, Thiago born back in 2012, and Mateo, born in 2015. Their love story is one of the sweetest in the soccer field, as they were committed to each other despite all the challenges they faced.