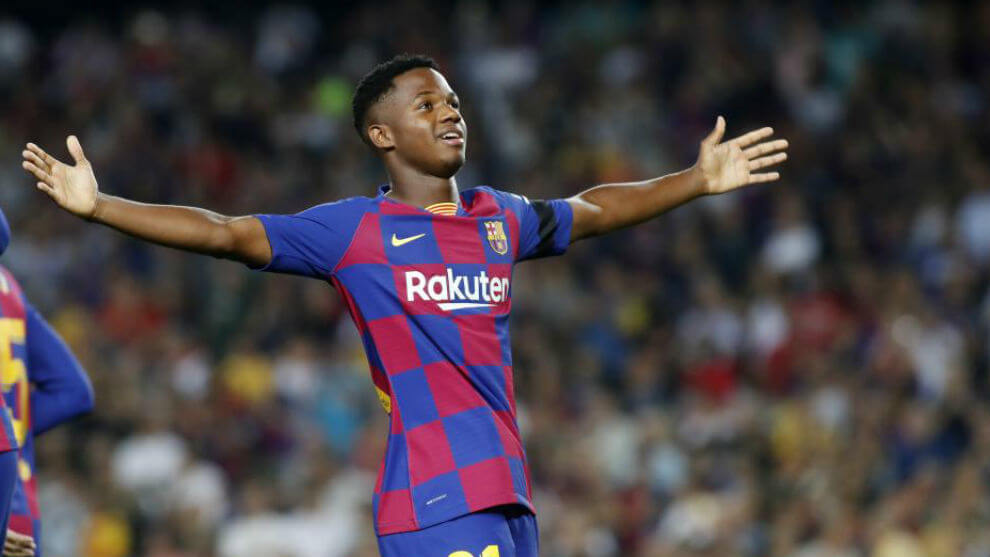 Ansu Fati net worth and salary: Ansu Fati is a Bissau-Guinean born professional soccer player that also has the Spanish nationality. He currently plays for FC Barcelona, one of the biggest soccer teams in the world. He’s currently 16 years old and already scored for the first team of Barcelona.

Ansu Fati’s Net Worth is currently undisclosed, but Barca signed Ansu Fati with a 100 million euro release clause. He is the second youngest player ever playing for he first team of Barcelona.

Since Ansu Fati is only 16 years old, we don’t have any exact information about his net worth. For sure, it’s going to be in the millions. FC Barca signed Ansu with a release clause of 100 million euro, proving how valuable he is for the team.

He also earns from event appearance, sponsorships and endorsements. Additionally he has 1.5 million followers on his Instagram page ansufati.

Anssumane Fati was born in Bissau, the capital of Guinea-Bissau. At the age of six, he moved with his family to Spain to start his soccer career. His parents are Bori Fati (father) and Lurdes Fati (mother). His father also played soccer professionally in his home country of Guinea-Bissau.

Ansu has four siblings (Braima, Miguel, Djeny and Djucu). His 2 brothers Braima and Miguel are also soccer players for Barca. Braima is currently on loan at Calahorra and his youngest brother Miguel plays in the same  La Masia youth team as Thiago Messi, son of Lionel Messi.

On September 20, 2019, Ansu Fati acquired Spanish nationality. This allows the attacker to play for both Spain and Guinea-Bissau in the future.

Fati is an attacker who prefers to play as a left winger. At only 6 years old, he started to play for CDF Herrera (a municipality in the Spanish province of Sevilla. Later, Sevilla FC wanted Ansu, but they eventually lost him to FC Barcelona. He played in the youth team of FC Barcelona from 2012 to 2019.

With his 16 years and 298 days he was the second youngest debutant ever at Barcelona, only Vicente Martínez Alama was younger in 1941 with 16 years and 280 days. His first goal for FC Barcelona was on August 31st, 2019 when he scored against CA Osasuna, making it 1-1 (the game ended 2-2).

On September 14, 2019, Fati was in the base at Barcelona against Valencia for the first time. In the 2nd minute, Fati scored his 2nd Barcelona goal. He was replaced in the 59th minute by the returning Luis Suárez. The match was won 5-2.

According to his contract, he will play for the team until 2022.