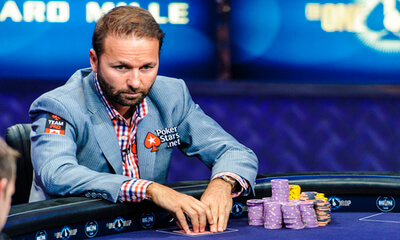 Daniel Negreanu is one of the most well-known players in the poker scene. He was born on July 26, 1974 in Toronto, Canada. His parents were of Romanian origin and hoped to migrate to a better life in the United States but ended up in Canada.

Negreanu has six different cashes for $1M or more. Here are his 3 biggest winnings till date:

$1 Million No-Limit Hold’em – Big One for One Drop

Looks like most of his major cashes are from Las Vegas. That’s because he lives here and frequently plays as well.

He dropped out of high school, one credit short of graduation, to pursue a career playing poker. This is a gamble that definitely paid off. He started to learn poker when he was just a teenager. He developed a strong interest in the game and started frequenting pool halls by the time he was 16.  At the age of 22 he moved to Las Vegas. Unfortunately, he was forced to return home when he lost his money in Las Vegas.

Daniel Negreanu has a lavish house. So if you wonder what millions in poker tournament winnings can get you, look no further. Wolf of Wealth has all the latest updates. Daniel Negreanu recently gave us a glimpse by offering up a tour of his futuristic Las Vegas home.

As he says in the video below, Negreanu had a couple of friends renovate his place about a year ago. It’s little surprise that Daniel Negreanu also has a nice poker table in his home. On his table there is a customized box of Game of Thrones, which tells us he must like the show a lot as well.

Another thing that Negreanu shows off is his arcade, with one machine that features 8,000 games and a beer tap on the side. Next to the arcade is his trophy area, where he displays six WSOP gold bracelets and pictures of him with Barack Obama. I’ll spare you the rest of the details from the house and just let you watch the video yourself. At two and a half minutes, this clip won’t take up too much of your time.

Daniel Negreanu has had multiple girlfriends over the year. Some of his ex-girlfriends are Evelyn Ng and Marissa Rachelle Rodney. In 2005, he married Lori Lin Weber but they divorced 2 years later. Over the next years, he has been involved with several women poker players and celebrities.

On the 1st of 2019, Daniel Negreanu decided to celebrate New Year by proposing to his girlfriend Amanda Leatherman. The PokerNews Host accepted the wedding offer. The couple dated back in 2010, and after they rekindled their romance in 2018, they decided to get married in 2019.

The wedding took place Friday night 17th of May 2019, at Terranea Resort in Palos Verdes, California. Some of the poker pros that attended the wedding were David Williams, Jason Somerville, Maria Ho, Jeff Madsen, David Benyamine and David Oppenheim.

You can find more photos about the festivities and Daniel Negreanu and Amanda Leatherman tying the knot here.

Also, something worth mentioning. He is the first player to make the final table in all of the WSOP’s bracelet winning locations: Las Vegas, Europe and Asia-Pacific.  Negreanu was WSOP Player of the Year in 2004 and 2013, making him the only player to win this title twice and in different decades.

Likely we haven’t heard the last of Daniel Negreanu, this legendary Canadian poker player. We might need to update this article after the WSOP 2019, when he gets some more million dollar payouts.