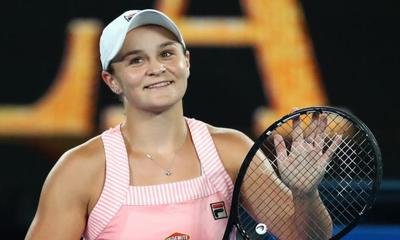 Ashleigh Barty is an Australian female tennis player (and former cricketer), that currently ranks first in the ATP rankings. She climbed the rankings fast, thanks to all her hard work in 2019.

Her net worth is currently a little over $10 million.

Net Worth of Ashleigh Barty (Explained in Detail)

Winning a grand slam tournament is big money. In 2019, she won the French Open by defeating Czech tennis player Markéta Vondroušová in the final. For winning this tournament Barty jumped to #1 on the ATP rankings for the very first time. She also received € 2.300.000 for winning the French Open.

Ashleigh was born on 24 April 1996 in Ipswich, Queensland, Australia to Robert and Josie. She has 2 sisters as well, named Sara and Ali. She picked up tennis at the age of 4 and since then she has been working hard to become the best in the world.  She went to attend Woodcrest State College when she was a teenager.

In 2010 Barty played her first ITF tournament in her birthplace Ipswich (Australia). In 2011, she won the Wimbledon junior tournament by beating Irina Chromatsjova in the final. In 2012, she was placed second in the junior ranking, and received a wildcard for the Australian Open. Primarily, she shined as a doubles player, but she broke onto the singles scene with a 6-0, 6-3 victory over Francesca Schiavone in 2013.

She also loved playing cricket. For that reason, she did not play tennis from September 2014 to January 2016. Instead, she participated in the Brisbane Heat cricket team in the Women’s Big Bash League.

Barty won the Kuala Lumpur tournament in 2017 – in the final she beat Nao Hibino 6-3 and 6-2. With this, she entered the top 100 of the WTA ranking for the first time. On the same day, she won the doubles title, along with Casey Dellacqua, in addition to this singles title.

During the years of 2013 and 2019, she was also part of the Australian Fed Cup Tea. Barty won the US Open in September 2018 with her double play partner Coco Vandeweghe and in June 2019 the single play title at Roland Garros. After winning the Premier tournament in Birmingham, she reached first place in the world ranking on June 24, 2019. Only one other Australian (Evonne Goolagong in 1976) reached number 1 on the ATP rankings.